skip to main | skip to sidebar

Success, Disappointment but plenty of Satisfaction 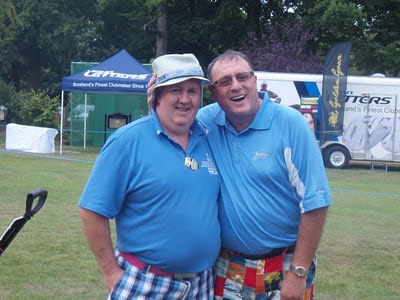 The Chuckle Brothers or the Blues Brothers, TSG and Peg at the BP3 before tiredness set in.

August and September was always going to be the business end of the season, starting with the British Par 3, culminating with the final chance to book a trip to Cyprus on the G Tour, inter sped with my first visit to he British Disabled Open and the prestigious PEOPLES OPEN at Royal St Georges not to mention Team TSGs defence of The Frank Worthington Celebrity Team Event. 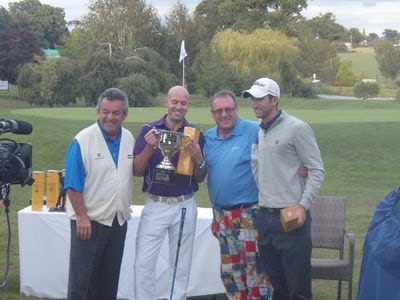 Plenty of opportunity for silverwear but a very tiring schedule as I would soon find out. Since my stroke I have in my mind rolled back the years, certainly playing better golf and felt quite fit, this schedule proved to me I certainly should not neglect what my body was telling me, too much golf and more importantly travelling was definitely having an impact on my well being and Golf an this was not just me TSG stalwart Peg Leg Roger has suffered similarly. th rigours of the 8 days in Scotland whilst so enjoyable are however still as we approach my return to Florida having an impact on my fitness, stamina levels. A much more streamlined summer is planned next year according to matron.
Anyway first he great news. Team TSG triumphed in the Celebrity Team Event at The British Par 3 at the fantastic Nailcote Hall. Skitty, Peg and I were joined by racing legend Bob Champion an appropriate choice giving his illness scares as well. we were quite simply superb as was seen on Sky Sports were we received superb coverage I am delighted to say. 18 under and a massive 6 shot cushion did in no way flatter us. A second British Championship Title for TSG right proud I was Too. Sadly my defence of the Pro am title with Cameron Clark was not to be successful the rails really coming off on day 2 when still in contention. My ball up the tree on the 9th not helping. Still again more TV coverage, pleasure of playing with Seve Benson of the tour and being a guest on the presentation party with Tony Jacklin, completed a most enjoyable week. Roll on 2012. 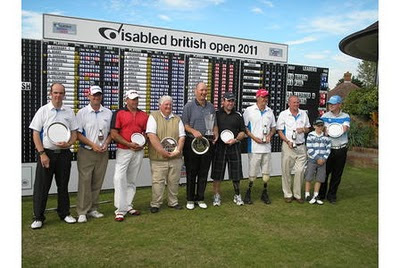 From here we headed straight to Brighton and the East Sussex National for the British Disabled Open. Peg lives local and he and his Mrs cordially lucked after us, sadly Roger and I were not at our best on this difficult track with rapid greens the least of our problems. Rogers shoulder putting paid to his hopes. The competition was fierce, organisation superb and some of the golf fabulous and I made many new acquaintances as well as meeting up again with the world cup guys again. Recognition to Andy Gardiner and Tony Lloyd from Team ngland for their successes. 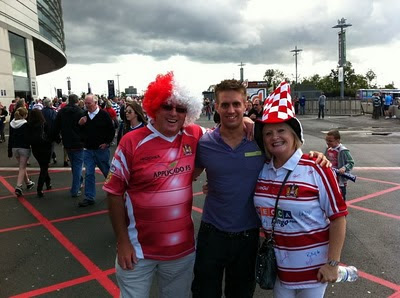 No Golf but a great Day, Dad, Mum and Son relish the Wembley
experience... Son was in Leeds End HA HA

No respite on travelling although certainly from golf as the next weekend we were down at Wembley watching Wigan lift the Rugby League Challenge Cup but the following week it was down to Sandwich in Kent to play Royal St Georges in the Peoples Open.

In the midst of a period of fine weather it was unfortunate that the final was on a day when the worst of the summers weather hit. Over 50mph wind, torrential rain, really ruined the experience. I never saw a putt hit were the ball was not moving and in on instant a playing partner hit a quite exquisite 20 foot bunker shot to 8 inches only to find after raking the bunker the ball had blown back into said bunker. On he 15th I was faced with a 100yard bunker shot, from a decent lie I hit an 8 iron flush it flew straight up and towards the green, then the wind blew it back some 30 yards over my head. It was simply attrition as players walked in. I am pleased to say I completed all 18 holes, totalled a meagre 21points but finished 5th out of 60 golfers and leading Senior. It was memorable sadly for all the wrong reasons.

Proud to play at Darrens Place

Back on the road again Team TSG headed back to West Midlands golf course for my good friend Frank Worthingtons celeb event. Despite poor Greens, wind, well a little squall after St.Georges our Team overcame a dire turn to all contribute on 7 and 18 which gave us a victory by just 3 points. Pegs Birdie on 18th and Steves par following mine and Kennys pars at 17 proving vital. It really was a team performance as opposed to fantastic golf. 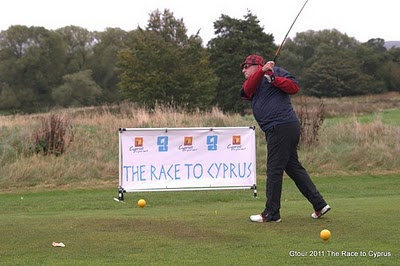 Another spanked down the middle.

So to my 8th consecutive weekend away, the G Tour event at Mottram Hall. Situation here clear, I should already have done enough to be in top 50 for National finals at Belton Wood ( were I won Bunkerfest ) you may recall. I am lying 17th in the Order of Merit, but you can never be sure... More importantly I am lying second in The Birdie Tier and a top 5 place could put pressure on the leader. The weather was again not friendly, the course penal, particularly he rough but I drive imperiously, quite sublime splitting the fairways shot after shot and despite the odd hiccup, play Par Golf and compile 34 points, I realise his is good score because in my fourball, the scores are 21, 22 and 15. My tally sadly finishes one shot short but I am delighted, this second place will catapult me into the top 5 on The Order of Merit and will give me the title in The Birdie Tier. a fine end to my debut on this highly competitive, totally enjoyable, superbly organised tour. A top ten place in the finals and its of to Cyprus in January. I am very confident.

and So.............Its back to Florida. I am playing in two competitions over there. firstly at Championsgate, I am playing in The Golfweek Tampa Bay Tours Major in early October then in the middle I try to regain The Florida Open in Sarasota. also plenty of practice so I'm really raring to go at BELTON.

Welcome to the world of the Social Golfer

The brainchild of golf-lover and stroke victim Ian Halliwell, The Social Golfer started as a travel and golfing journal published to raise funds for The Stroke Association and grew to include the Social Golfer website and this blog where you can follow Ian's tireless fundraising golf trips around the world.

Prior to his stroke in December 2006, aged just 48, Ian was an avid golfer and had enjoyed many golfing trips to the Costas, Tenerife, Tunisia, and South Africa. Playing off eight, he still harboured dreams of retiring and trying for his card on the Seniors Tour, but these dreams were smashed just days before Christmas when he suffered a major stroke. The journal takes you through Ian’s recovery, and details how he’s heeding Bernard Hunt’s advice to “become the best damned social golfer on the planet”.

"I know that there are many people out there who feel beaten by stroke. Progress can be so slow and frustrating that it often seems easier to just give up. Golf helped me focus on my recovery and I’m hoping that my journal will help others find their own motivator."